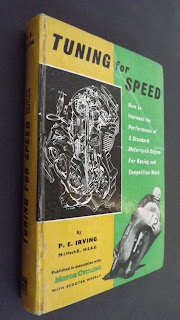 Well I guess my karma changed, I was just able to score a copy from the UK for a decent price.  So I have added to my technical library a book that everbody says is the best.

Any chance anybody has a spare to requirements copy of Tuning for Speed by the brilliant Phil Irving?  I keep getting sniped on the well know auction site, turn head and spit.

Drop me a note at roy@kiotee.us if you do.
Posted by Roy at 6:46 AM No comments:

New Tool in the Garage 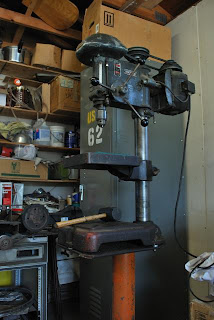 Lucked on to an Atlas drill press recently.  Nice older Model 1020.  The stand is a bit farm cobble but is sturdy.  Took some time to square it up and wipe it down.  Interesting bit is that at sometime in the past a second triple pulley was placed between the headstock and the motor.  I’m sure the thought was to get more speeds.  However with out some sort of rev counter I’m not sure what speeds it has with the modification.  Nice thing is the entire headstock and bearing got rebuilt and tuned up before the resale.  It also still has the original Atlas motor which can be wired for either 120 AC or 220 AC.  The story I got from the seller was that his friend was just going to take it down and recycle it.  Glad he didn’t.

Still need to get a good vise and was thinking of trying to find a cross slide milling table for some light milling of things.  But for now I have a dill press so I can put the hand drill away. 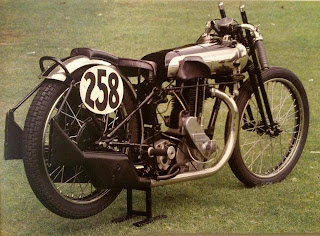 Bit of an update.

This bike was ridden in the IOM TT Centenary in 2007 on the original St Johns Course, then displayed at Tynwald along with many other bikes including the original Senior Race winning 1907 Norton-Peugeot.

That bit of info was provided by reader No1Mk3.

Thanks for the info.  Any chance you know who owns the bike?  I would love to be able to talk to them about it and get more and better photos of the details of the bike.  While as you can see I'm not trying to replicate the Brough single I am still very intrigued by it.  Did you happen to see it run and of course how did it sound.  Yep I'm pretty much a geek.  If you don’t have more info do you think the IOM people might respond to a request for information regarding it?  Thanks for taking the time to look at my pages and the verbal wandering.  Any more photo or further info please drop me a note at roy@kiotee.us.  I couldn't figure out how to reply to you from the bolg.

Dawg Days in the Garage

Well summer has truly hit and the temps are way above anything you would dream of in the deepest heart of winter.

Things have been slow so I decided to take on some garage help.  He sure likes the shop truck I can tell you. 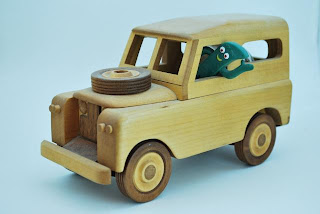 Can’t get much work out of him because he always says he has to run and get parts.
Posted by Roy at 7:18 PM No comments:

Life does get busy! 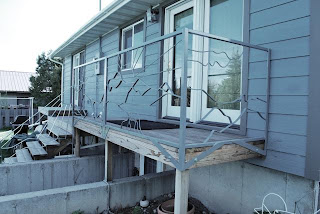 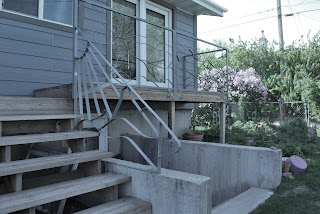 Work, family and numerous miscellaneous things have kept me busy.  Busy not always doing what I want.  So first up I helped the Number 1, and only, son install the railing he built for his mother.  Great part is that the railing is up and everybody is happy.  Mom got her railing, son completed a long term project and I got the railing out of the garage.

Sort of hard to see without a back drop to give some contrast between the railing and the house. But the railing has several inspired scenes of sunrise, sunset and moon rise over the mountains.  In person it is very nice and more importunately exactly what mom wanted. 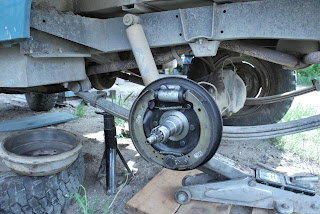 Next up is Kiotee my 62 Rover.  I needed to replace the rear axle seals and do a general clean up on the rear since I had done the same on the front.  However getting the proper seals proved a pain and then when all was completed and a test drive was in order my karma ran amuck.  Going from 4th into Overdrive revealed that the synchro clips in the overdrive gave up the ghost.  So I walked home alerted my son and we drug Kiotee home.

Got the overdrive out of the truck and started cleaning up and ready to install the new clips.  Seemed to be a pretty straight forward operation until I gave it a go.  No matter what I have done and no matter what tools I use I can’t get those damm clips in.  So far I have busted two clips and bruised the hell out of my hand.  So sitting on my bench is a very nice lump that is totally useless unless I can get those clips in.  To suggest that the mood in Kiotee Garage is poor would be an understatement. 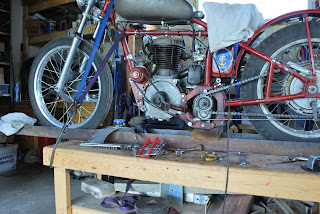 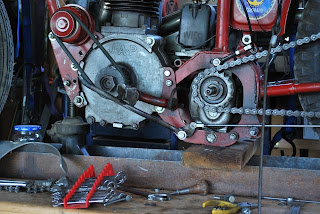 In and effort to actually get something done I turned to more work on the JAP SV.  After Version 1 of the rear brake pedal failed I am now working on Version 2.  Getting closer and I think this version actually might work and not turn out to be too dangerous.  We will see.  With my recent level of success in the garage, I’m not putting bets on any of this.
Posted by Roy at 1:16 PM No comments:

LEARNING, RESEARCH, TOOLS and other things of two wheels 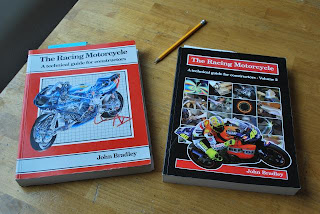 I have been busy but don’t have much tangible to show for all the effort that has been expended.  After my first look at a Sonic-Weld like spine frame I decided I needed more learning about frame design and construction.  So I dragged out two fairly well respected books on the subject of motorcycle design and fabrication.

Of course this lead to other sources of information and so time just evaporated away like on a hot day in a draught summer.  But I have learned much and feel much better about what I’m trying to do. 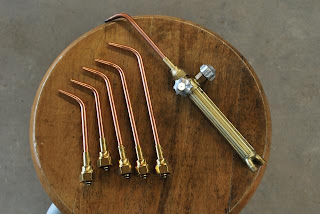 As for the tools there has been a drastic management shift in the upper echelons of my employer so I will have to give up access to the TIG welder.  While this loss is semi-irritating I have stepped back and outfitted my UNIWELD Airline torch with more tips.  This range of tips will give me the right size for welding pretty much any type and thickness of material I’m likely to use on this build.  I haven’t given up on TIG just don’t have the kind of access I need to learn it at the moment.

I have had one bit of a set back regarding the JAP SV.  I thought I had a solution to the rear brake linkage.  I thought, but when put to the test the linkage failed semi-dramatcially and locked up the rear wheel.  All low speed and nothing got damaged.  Well only my ego because I thought it was a nice clean little bit of work.  Good thing I tested it down the alley and not on the open road.

As winter finally gives way to some sort of spring weather I have taken the time to get my other two wheeled passion in riding shape.  I also took the time to clean up and get prepared a loaner single speed that a friends needs the last bit of June.  Both pretty unusual bikes in certain respects.  Got them free of the winter storage and did a bit of clean up and tune up.  Along with some new tubes and tires. 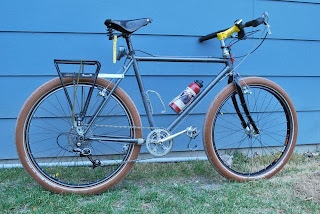 The Proteus started as a used frame I was able to snag.  It was silver brazed by the firm called Proteus someplace of the east coast.  I can’t remember all the details.  However were the first shop that an amateur could get small quantities of bike building supplies from way back in the 60s and 70s.  They also built custom frames.  This particular frame was built using a then new 531 Mountain Tube set from Reynolds.  Conventional wisdom suggests this frame would be too small for my 6’ 1 ½” fat old body.  However the top tube size is perfect and the bike rides and fits a dream.

And the unusual bit doesn’t stop there.  I’m running a set of Chris King single speed hubs on Rhyno Lite rims.  This gives me the same length spokes in the front and rear wheels.  I also am running 6 cogs on the single speed hub.  Because the hub is a full width flanged hub the spoke length is the same side to side because there is no dish.  Up front I have a classic set of Cook Brothers Dog Bone cranks on a White Industries TI bottom bracket with sealed bearings along with three chain rings and no shifter.  I’m lazy, old and not a racer so it’s pretty easy for me to read the road/trail ahead and decide which ring I need to be in.  Stop reach down and move the chain by hand.  No I don’t find it bothersome.  While losing on the fly shifting I lost the weight of the shifter on the bars and the front derailleur and cable.  The rear is controlled by a Sunture mountain thumb shifter and the brakes and levers are from Paul’s Components.  The seat post is a White and all of the skewers for the seat and wheels are something TI.  And of course the seat is a Brooks Conquest.  The bars are from Jeff Jones and are his H-Bar in TI.  The headset is a classic Campy off road bit that has been ok but a bit disappointing because I can’t keep it tight for some reason.  And the new tires are Fat Franks.   Love the tires.  They are a 2.35 and fill my fame but the ride is Most Excellent! 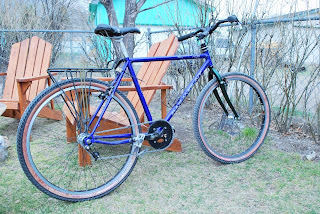 A Most Excellent Gift! 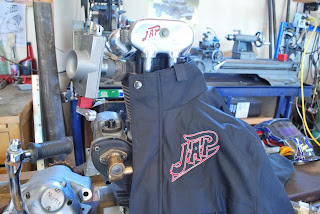 No excuse for not mentioning this sooner.  But as a Christmas gift I got a new winter coat from my son Ian and Bree, my esteemed daughter-in-law.  Of course for me the very special part was the embroidery of the JAP company logo that Bree spent a great deal of time and with great skill rendered perfectly.  Bree, I apologize for not acknowledging your great work sooner.
Posted by Roy at 7:37 PM No comments:

THE THINGS YOU LEARN

Recently I have been messing about positioning the big bit of the to get a feel for what the frame will be.  In the process the gear box and clutch basket and the drive cog on the engine needed to be lined up for the first look.

All went smoothly until I got to the chain cog on the engine main drive.  I had a splined stub and a nut but no obvious way to secure the cog.  Well at least obvious to this novice but aspiring garage monkey. 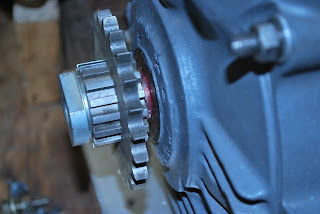 I couldn’t even figure out what type of fixing I should be looking for in the spares.  So I grabbed a photo and put out a query to the JAP engine experts who read a JAP engine facebook group.  Sure enough I got several quick replies regarding how the splined stub, nut, cog and the missing fixing, a circlip, should work. 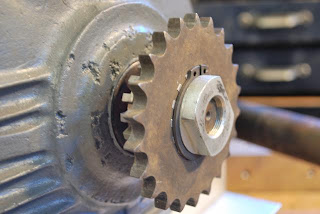